What wonders had you formulated in your SNIP?

It is perceived that the kindergarten children in Sølund are characterised by high tempo and many changes in their play. The children's imagination and inputs for play often come from films (visual impressions) with familiar characters and familiar worlds, and merchandise is a large part of the children's shared play universe.

Immersion in play over time - getting lost in play and getting into flow - is difficult both because of the children's pace and shifts, but also because of the challenging physical environment. The children are generally seen as inquisitive and curious, interested in animals and creatures, but in need of new inputs. Through our collaboration with the Glyptotek, we would like to inspire the development of imagination, creativity and storytelling together. Against this background, we have formulated the following question: How can we work with the children's imagination, body awareness, cooperation and love of storytelling in our meeting with Glyptoteket?

How has the process gone in relation to your wondering?

How have you approached the process?

Stefan comes to visit and we talk about what a museum and what the Glyptotek is? We'll hear about statues and animals, and Stefan brings a piece of marble for us to touch. Inside the Glyptotek you can't touch, but you can make a binocular with your hands when you feel like touching. We talk about what we're going to do in there, and Stefan brings a map of the route we're going to take. We play at being an animal or a fantasy animal, and we try to stand like a statue of a fantasy animal.

On the way to the first meeting:

On the walk to the Glyptotek, the children talked about Stefan waiting for us. They knew what they were going to visit, there were landmarks and recognizability that were fulfilled and concretized on the visit. The children look forward to the visits - it's a kind of honeypot. In City Hall Square, they had taken up binoculars and looked for statues.

Reflection: the session was very linguistic and some children have language challenges, so how do you best distribute the word? Agreement to try a talking stone next time.

Go from A to B as a game, but not in front of Stefan - it's not about being first.

On the way to the third meeting:

On the way to the Glyptotek we stopped in Ørstedsparken, where we looked at the picture of Perseus and Medusa and talked about it.

The kids were more wild this time, but maybe that's also a sign that they're more confident now than they were the first time. They're testing the limits of what you can do at the Glyptotek. At the same time, they were prepared to go in and hear a scary story, and it's hard to do anything else when you've got it in your head that you're going to hear something scary.

Reflection on the work of our wonder:

When Christina said: "Anyone who can hear what I'm saying puts a finger on their nose", the children had the experience of being part of a community while at the same time doing an individual exercise with their body.

The programme and the visits can be a preparation for being in the public space with your group. Big difference in 0 grade students who have been on tour with their kindergarteners. They know what to do/don't do, how to use the adults etc.

At the end, Stefan pointed to the mausoleum and said: "Look, there's Athena" and "Look, there's Jacobsen". It is quite natural for the group of children to now know about these universes. The Glyptotek has many intricacies and twisted narratives that need to be understood over several times, and the children can now do that. And it's easy to build on that universe. A universe has been created for the children that is in line with the universe around Paw Patrol. If we can introduce them to more stories, we can expand that universe.

How have children's perspectives been expressed/included?

At the children's meeting, the children had the opportunity to talk about what was going to happen. Along the way, the children were encouraged to think of names for lions, make movements, come up with imaginary animals, etc.

What changes have you experienced and possibly recorded in your snap narratives?

Children play different games and with different people than they usually do?

It is too early to say whether the children's experiences at the Glyptotek have spilled over into their play, but the educators have observed that the children have been engaged in conversations about courage. For example, a child in the cloakroom says "Come on courage" and beats his hand on his chest, echoing the Glyptotek experience. The educators also describe that together they have talked about courage in many contexts, which they have not done before. For example, courage to taste food, courage to dig, or courage to participate.

In the story about Perseus, Malte describes that they talked together about how Perseus was brave and that the children were brave because you were there. But what about the child who doesn't dare to join in? Here Malte describes how he told the child that he was brave for daring to speak up.

Do educational staff act differently than they did before?

Both Christina and Malte have had the opportunity to do exercises with the children in the ballroom, and this can be worked on both at home in Sølund and at Glyptoteket.

Which elements of the meeting with the cultural institution are included in practice?

In Sølund, work continues to:

How has your collaboration been?

It has been a trusting collaboration, where we have been open to each other and good at helping and supporting each other, but also at giving each other space. We have worked together to decide what should happen from time to time and divided the roles between us. When the processes have been going on, it has been easy because we complement each other well.

How will you use the experience in your future work?

In Sølund, work will continue on the stories from the Glyptoteket. This work will be complemented by a letter correspondence with Stefan, in which it will be mentioned to the children that we have a friend at the Glyptoteket. Christmas card. In the letters Stefan will make suggestions for what they can do.

Before Christmas, they will revisit Perseus and Medusa in Sølund and listen to the story together. After Christmas they will start building universes for the story. As the process continues with Stefan and the same group of children, more stories will be worked on and built on top of the universe with dragons, Athena, titans etc. 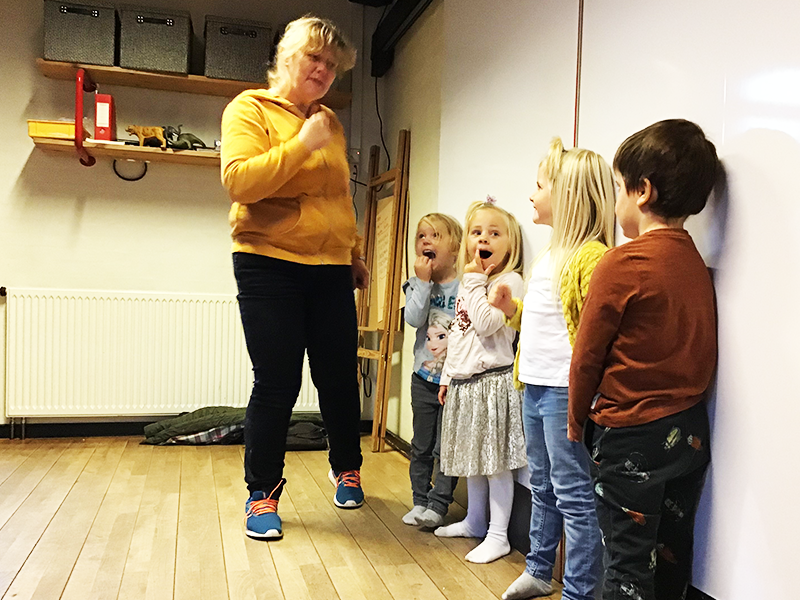