We have had two groups of about 10 - 12 children per session and three adults. The children have been the oldest in the kindergarten.
Our starting point was to become better at following the children's tracks and taking an active part in them - to seize the moment. That it became the children's narrative/expression and focus on process rather than product. That for some adults it would be about daring to "let go".
The children who have participated have moved together in a preschool group from 1 December and have spent time settling into the group with some familiar adults and newcomers. And then December is just filled with lots of other things: Christmas calendar, cosiness, Christmas presents and Filurius the farm gnome and his friends (puppet show).
Here in the group, we haven't consciously pursued that much yet, but have plans to. The children, on the other hand, still talk about Play Art and Lars (how good he was at telling stories). They use what they have learnt and want the adults to join in the play.

Some of the staff who participated remain in the nursery (there are two in the pre-school group).
Play art has sparked many things. Adults are thinking more outside the box, letting children be in their play and following them. It's not so controlled always, lets there be "chaos", lets go and is open. We think we have always let the children express themselves creatively - their drawings and clips, it doesn't have to look a certain way. In some rooms the children do puppet shows with props. We do that to an even greater extent.
So we are much more aware of process and not product.
There has clearly been a difference from start to finish in how the children have participated and contributed. There has been development. For example, the quiet children, how they have opened up more, taken initiative and the children have generally really wanted to participate. It makes a difference that they discover that what they contribute has value, there are no wrong answers. Everyone grows from that.

Lars' infectious empathy has clearly made its mark. It has inspired the adults to be more playful, to indulge in the children's play and playfulness. He has been a really good and inspiring role model, for example when he goes down a gear, creates a very special world and now we are here.
Being involved in Play Art has added an extra dimension to our curriculum and the ICDP. A good practical pedagogical tool. The children have been very good at remembering their progress. They have drawn, told and pictures have been taken. It has been used for an inspiration board for both children and adults.
For some, there is a need to structure the Play Art idea, in order to implement it more widely (also among the adults who did not participate). Others find it easier to do here and now in daily life. There is freedom to do what makes sense for the individual but we have a common goal of greater awareness of the involvement of the children and their perspectives, as well as present adults. We will use this to go deeper into our pedagogical practice when evaluating processes.

Having been part of Legkunst has given rise to topics we will work on further as shown above. Including how we can refine involving the children and their perspectives. For example, at the studio meetings. Also be investigating what impact/impact it has on the children that we are more meditative.
All in all, it has been a positive and inspiring experience to have been part of Legekunst. 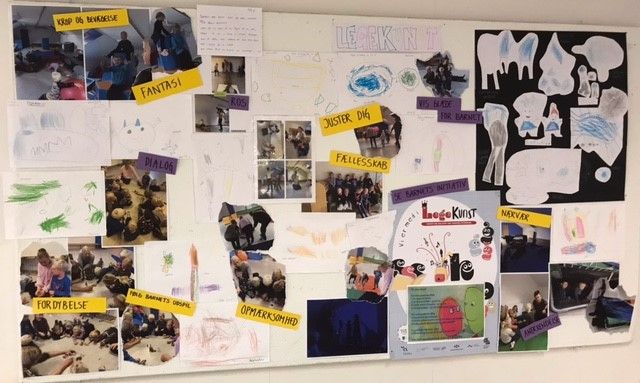